Before I start post something about Sprites, I will need post about Game View Cameras ‘s Concepts of Parallel Projections. If you are following this blog from the beginning, you must know that I’m developing a game, and this blog is about Electronic Games (Development or not) and about the game that I’m working on. So let’s back to the main subject of this post. Do you know what is an Isometric Game?

In video games, “isometric” refers to some form of parallel projection (commonly, the form of dimetric projection mistakenly referred to as “isometric”) where the viewpoint is rotated slightly to reveal other facets of the game environment than are visible from a top-down perspective or side view, thereby producing a three-dimensional effect. The terms “3/4 perspective”, “2.5D” and “pseudo-3D” are also commonly used.

With the advent of more powerful graphics systems, “isometric” projection is becoming less common, instead being replaced by perspective projection.

Did you understand? No? Maybe? Sure! Dur!?

Well, do you know a game very popular with the name of “Chrono Trigger”? 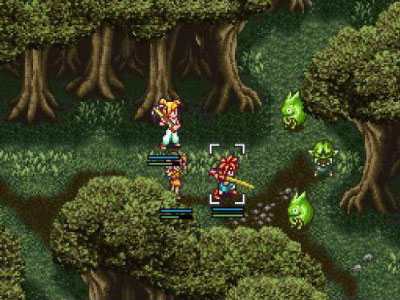 Is really very common the most of the people thinks that Chrono Trigger is an Isometric Game and that is SO WRONG. Well truly speaking is not “SO WRONG”, because Chrono Trigger have a parallel projection. Oblique rays hit the canvas at angle between 0 and 180 that’s not 90 degrees. This results in completely arbitrary scaling of dimensions and angle proportions. See the difference? Final Fantasy Tatics and your isometric projection.

n an Isometric view, the scale of all three dimensions — x, y and z — is identical, and the angle between each axis is 120 degrees. A Dimetric view is very similar to an isometric one, except it’s a bit more loose with its restrictions. Only two axes must be proportionally foreshortened and result in an identical angle (doesn’t really matter what the value of this angle is), while the third one is simply based on the remainder. This is the projection type that’s most often used in videogames and pixel art.

And Trimetric view is the angles between all three axes are different, and, as a result, each axis is also foreshortened by a different amount.

It is just to try make clear the difference between the Parallel View Cameras.. I’m posting about it, because I will be using something between dimetric and trimetric view in my game and BEFORE start to DRAW any SPRITE is very important try to define what camera are you going to implement in your game. 🙂

Oh, and here bellow you can download an Isometric Grid, if you want print to …  it is good for start to drawing over a isometric grid to draw isometric things. 😛 < obvious :3

-EDIT 03/03/2013: If you are looking for a better Isometric Grid, I really recommend you to check this post of mine.