The Mini-Review this week is FTL: Faster Than Light, if you never heard before, I recommend you read bellow. 🙂 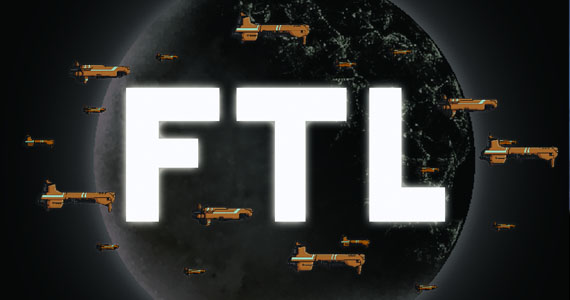 FTL: Faster Than Light is an amazing real-time strategy indie game. The player controls the crew of a single spacecraft that must deliver a critical information to an alien fleet several sectors away while being pursued by a large rebel fleet.

The game has a simple story but a really nice system behind it, where the players go through planetary systems and each sector. Every place you go could happen something different to the player since a planet asking for help or a fleet trying to kill you. While the player travel through the sectors he can be facing rebels and other hostile forces, recruiting new crew and upgrading their ship. The Combat System happens through a “pausable” real-time in two “screens”, one show the player’s ship, with the status, the crew and the other shows the enemy’s ship. The player can choose what weapons to shoot, each shoot will cost some energy, so sometimes you don’t have the energy for any kind of weapon and you can put energy for the weapon from the engine or other place on the ship. And if your ship get destroyed is game over. Yes, the game has a permadeath, that really worked very well for this genre of game.

At the start of each game, the player chooses a spacecraft which own a number of “rooms” devoted to a specific system, like piloting, engines, weapons and life support and of course the crew. Each room have your function like you need have one crew member in the piloting room if you want the ship to move and have “bonus” to avoid attacks.

The game randomly generates a series of sectors, each sector has about twenty waypoints of interest. The player must go to the warp between these points, and while you traveling between the waypoints you never know what could happen. Often, the player will encounter an unfriendly ship that engages in combat. Here the game becomes a real-time space combat simulator, though the player can pause the game to evaluate the situation and input commands. During combat, the player must manage which ship’s systems to activate considering the power draw on the ship, ordering the crew to specific stations or rooms to repair damage, and targeting and firing of weapons on the enemy. Damage to the ship can include failure of specific systems until a crewman repairs them, hull breaches that leak air to space, fires that can be either put out by the crew or by starving the fire of air, and general damage to the hull which can only be repaired at stores and other specific locations. The game ends if the hull fails and the ship is destroyed or all of the crew members die. The game uses permadeath in that although the player can save games between playing sessions, the save game is immediately overwritten upon relaunch, preventing the player from restarting a game from a previous saved game. The player is successful in combat either by destroying the enemy ship, eliminating the enemy crew or damaging enough to cause the ship to surrender.

FTL is a really fun game, the permadeath can disappoint some players, but I think it is part of the game’s pleasure. The way you control your ship and crew in this game can make you feel like a “Captain Kirk”, yes if you ever dreamed to pilot a USS Enterprise from Star Trek like a “real” one, this may be your game. The graphic is really a simple 2D and the hub may scare some start players, but for a “simulator” game, it is really very good and works very well. Another thing, some review says FTL is hard to play, that’s not true, the game is pretty “simple”, but with a complex simulation behind it. The player starts to understand the game little by little while playing. Don’t forget to mention the amazing soundtrack behind the game. it’s really good.

The problem of FTL is the “Game’s objective”, I understand the game has his focus for “Rogue-Like” and “Spaceship Simulation”, but the game may get a little boring after some time.