Hello guys, I really enjoy Management/Simulator Games like Simcity, The Sims, City LD and others, and this time I will do a very simple review of the “Game dev Story” .

First of all, What this game is about?

This game is a simulation of the gaming industry, where the player’s role is to manage a small game “company”  and make it grows, be recognized in the market. So, for this, the player will simulate game development, specifying the genre of the game, the subject of this game and publishing it. In parallel the timeline run and the gaming industry evolves emerging new consoles on the market and one of the main functions of the player is to adapt to these changes on the market.

The original Game Dev Story was released in Japan for the PC in April 1997 and so, ported and published by Kairosoft for the iOS and Android operating systems. It was released on October 9, 2010.

First of all, the game is really addictive, every time I was starting to play just for a few minutes and when I looked at the clock had already spent hours out of my life. The game is really exciting, it makes you want to try different combinations in the development of new games to see how its impact in the public and in the market, the game is rich in details, but all very simple and intuitive. The player starts managing a small room with a table for four employees, with two employees, allowing more employees to be hired. The more employees the player have, faster they accomplish the projects. Each employee can have more than one feature or skill, such as: designer, coder, writer, producer and many other roles that make the game even richer. 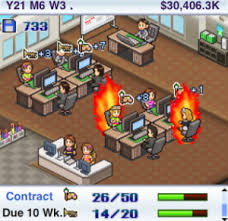 Both the office and the employees can receive enhancements, the player can train your employees to be better in some more specific areas.
The player can start developing a game, but if needs money in a short time, the player can work on a contract and get money faster.
While the player is running your business, the gaming market evolves, and new consoles are launched and it is possible to see some consoles like “Intendo”, “Senga” and others whose names resemble many other from the real game market. A small problem is the game’s timeline only lasts “20 years” in-game (something between 5-8 hours in our world), after that time it is possible to continue playing, but many features of the game are disabled as the evolution of video games, the possibility to upgrade the office  and the record maximum sales.
Anyway the Game Dev Story is actually a pretty fun game, with “retro”  graphics  extremely charismatic and yeah I recommend it. 🙂