Hello guys, so if you didn’t know, Attack on Titan or Shingeki no Kyojin is getting a “Movie”, this movie is all the first thirteen episodes of “Attack on Titan” compiled into a full-length feature film with new original scenes and a great improviment on the animations. 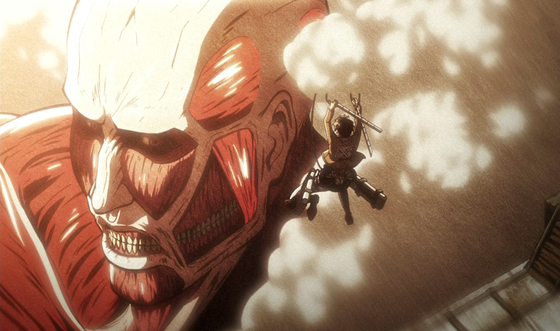 If you never heard about “Attack on Titan” before:

Attack on Titan (Japanese: 進撃の巨人 Hepburn: Shingeki no Kyojin, lit. “Advancing Giants”) is a Japanese manga series written and illustrated by Hajime Isayama. The series began serialization inKodansha’s Bessatsu Shōnen Magazine on September 9, 2009, and has been collected into 14 tankōbon volumes as of August 8, 2014. It is set in a world where humanity lives inside cities surrounded by enormous walls as a defense against the Titans, gigantic humanoid creatures who devour humans seemingly without reason. The story initially centers on Eren Yeager, his adoptive sister Mikasa Ackerman, and their childhood friend Armin Arlert, who join the military to fight the Titans after their home town is invaded and Eren’s mother is eaten. As the story progresses, the truth behind the origin of the Titans arises and the story shifts to one about political subterfuge.