Famitsu has revealed this week the new JRPG developed by Sega “The World End Eclipse” ワールド エンド エクリプス, a new free-to-play “online theater RPG” and it is coming this winter in Japan for PS Vita Smartphones and PC. And if you didn’t get used to online and no table-console games coming from Japan, is better get used to.

(Yeah that is sad I know, read this sad POST HERE to understand) 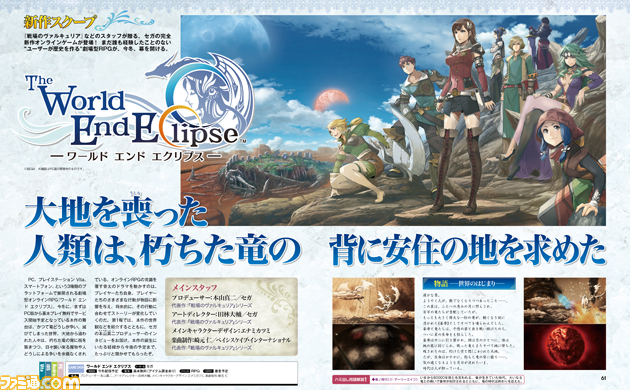 So, the game is produced by Shinji Motoyama, he made an amazing work on Valkyria Chronicles 2. The character design is on the work by Katsumi Enami.

It is set in a ruined world destroyed by a war between dragons. People who were chased off the land built a city on the back of a dragon carcass and are forced to deal with conflicts caused by people and attacking goblins alike. That’s the setting; it’s not only fantasy, but it has military elements, as well.

Save data is compatible across all three types of hardware, and online servers are shared, meaning cross-platform co-op play is also possible. Additionally, the game’s world might change depending on the player’s actions. Read more in GEMATSU