and this time is a MOBA (Multiplayer Online Battle Arena), judging only by the video bellow the game looks very similar with the MOBA “Smite”.

The game is a third person MOBA with two teams seven-on-seven fighting between monsters summoned from five unique groups including beasts, demons and undead. The game have customizable decks, avatars ad maps. 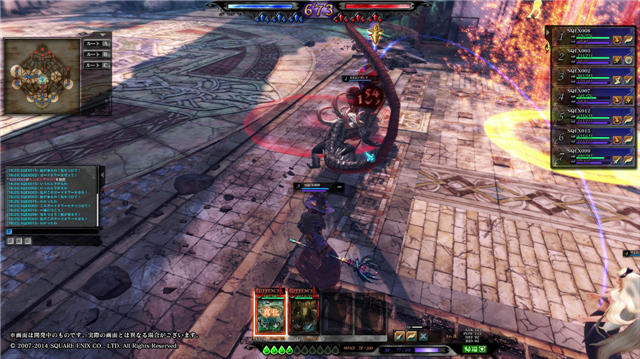 And if you never heard about Lord of Vermillion Before:

Lord of Vermilion (ロード・オブ・ヴァーミリオン Rōdo obu Vāmirion) is an arcade-based fantasy collectible card game developed by Think Garage and distributed by Square Enix in which players control combat cards on an arcade play surface. The objective of the game is to destroy the enemy team’s Arcane Stones and eliminate their servants in order to win the game. Players design and developavatars, increasing their statistics and obtaining equipment, then compete with each other locally, or online, or play the single player story mode.

So, is from Square-enix that mean we can play with Cloud and other Final Fantasies Characters? Well yes, Lord of Vermillion universe include Final Fantasy, Romancing Saga,even Blaz Blue universe and more.

The game will be launched in 2015 and will be exclusive for PC. But will have a brief alpha phase that will happen on October 17 and 19 of this year. Square-Enix is looking for 2000 testers and has a sign-up page at lova.jp, which also contains more information about the test.