Ok, I like Final Fantasy series and I was very hyped about Final Fantasy XV what was shown in E3 2013. And this year with the new trailer, the game looks very beautiful but… Graphics is not everything.

Now the battle system is the great concern about the game. At first the Game was turn-based and that was perfect. So late they said the game would have a battle system something like Kingdom Hearts and for me it is Cool, would be a good change, Kingdom Hearts have a nice gameplay system. However now… The game play itself, you can hold the attack button and your character start to kill everything.

A：You can fight like that. I think in the recent play demonstration we showed several techniques and functions, but at E3 last year the game was running on a prototype environment (Ebony). At TGS 2014 we showed the game running in the actual environment (Luminous). Right now we are in the process of migrating functions from the prototype into it. It will take time to migrate it all. I wanted to show footage in the actual environment as soon as possible, so I ended up showing something that is in the midst of migrating. The video shows actual footage, not an idealized version. It will become more and more advanced from here on out.

Q: Can you go into detail about the “holding down the button” issue? Is it really okay to just hold the button down?

A：It’s not that simple! (Laughs.) Yes, when you continue to hold down the guard button, you can basically auto-guard and evade, but it consumes MP. You can’t infinitely evade. You have to think about timing, when it’s a good idea to attack or evade. Also, you aren’t invincible. There are attacks you can’t avoid. In those cases, there are also essential technical evasion methods.

Q: What about attacks?

A：When you push the attack button, you invoke the standard combo. You can change the actions by using it in coordination with the directional buttons. The actions change depending on your circumstances—things like whether you’re guarding and whether the timing is right, (imagine in this circumstance: when you’re guarding, you might get a chance to counterattack or something), or if your companions are nearby.

Q: Can you change the operational character?

A：Not in its current specifications. Everyone on the development team thoroughly looked into an Active Cross Battle system that made free use of attack, guard, and co-op functions, but as a result they arrived at the conclusion that changing characters would be too difficult. In order to create a new and interesting battle system, we ended up not being able to put in the character switching.

Q: Is jumping in?

A: It is. Considering PlayStation 4 has plenty of buttons, there is an independent jump button.

Q: What about free running?

A: It’s there. Except for the character switching, everything that was in the E3 2013 trailer is still there. All the cool actions like the weapons barrier that surrounds Noctis called “Phantom Sword,” and the short warps and jumping from the Behemoth battle are in the actual game. We’ll release more information later on, so please look forward to it.

Q: What about weapon selection?

A: You set them yourself before battle. You set each weapon considering what actions you can use with which weapons. You can only determine one weapon from the ones equipped to be your main one, but that weapon will come with techniques which can be invoked at your discretion in battle. Besides the basic assault button (attack), you can invoke techniques with the technique button.

Q: I can’t tell if it’s more like Kingdom Hearts or Final Fantasy Type-0. Which is it?

A: We explained that when you push the attack button, you invoke the standard combo, which is similar to Type-0. Considering the battle system as a whole, however, it is different from both Type-0 and Kingdom Hearts.

Q: Is it being simplified for casual users? Is is still an action RPG?

A: In order to widen its appeal, we’re developing the game aware that anyone can immediately be able to play it, however the game as a whole is not casual. Because it’s a core game, we have casual controls. If you obtain good weapons and level up, you won’t have to worry about clearing the main scenarios.

Q: Will you listen to feedback from the demo version?

A: We want to reference your feedback during development, but how we’re going to do that is still under review.

Q: Haven’t you been poor at putting out information?

A: If our fans are uneasy about the information we have released, then our ways of issuing information may in fact be poor. Even though we didn’t have a lot of time, I wanted to make clear the current situation. In the future, our information releases might be poor, but I think we can receive your approval.

The idea of the game looks “good” and I’m totally “ok” with “to control only Noctis”, in Kingdom Heart we can only control Sora and that is perfect, but Square-enix in my opinion is thinking so wrong try to transform big projects in Casual games, it may work for Smartphone and portable games, but not really for console and computer games. For me one great mistake of Square-enix in Final Fantasy XV  was changing Tetsuya Nomura for Tabata Hajime. 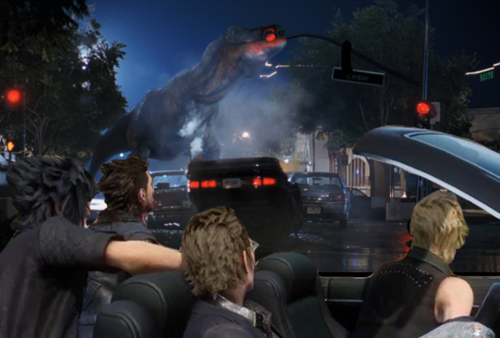 I think Final Fantasy already has great fans and now Noctis, the main character of the game also have fans. The game with good or  bad gameplay system already has so many people who really wants to play and the game development cost must be so high that makes Square-enix tremble in fear of making something more like Final Fantasy and fail to reach new players around the world.

Well for me the game looks awesome, but we will know better in the upcoming demo. 😉

For last, Tabata revealed he has taken a liking to the “Car Driving” meme surrounding Final Fantasy XV. He finds it hilarious, actually. So much so that he released official assets for meme makers. quoted from gematsu.com 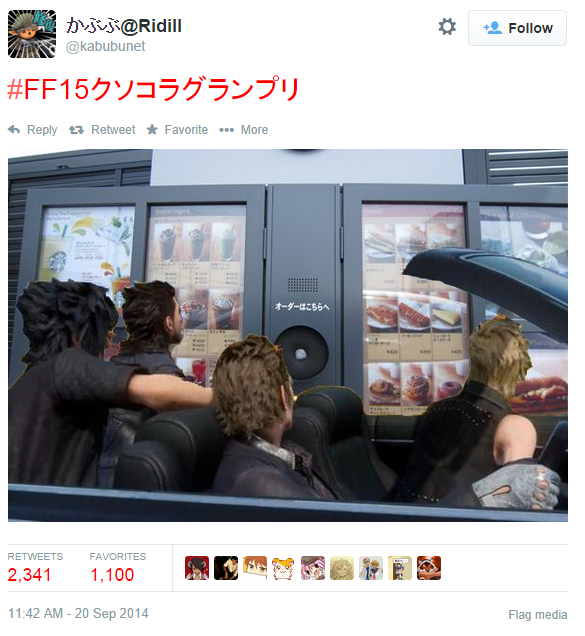 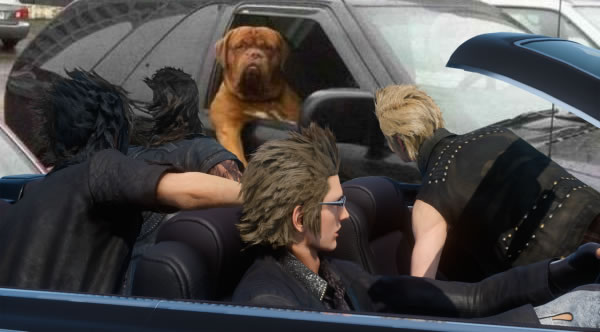