True-Review: So that is the result of Final Fantasy XV… (No Spoilers)

Let’s skip the introduction and avoid the gibberish about the game was in development for 10 years and more… Final Fantasy XV is a good game, an “MMORPG”, which you play alone with a lot of things to do and with a nice customizable car to drive like a train on many rails.

So here I am after do almost everything in the game and… The game is “good”. I got a lot of fun playing it. After my 40 hours I was still excited in playing it, what is rare, most of the games after 20 hours I start to get tired, but this didn’t happen to Final Fantasy XV.

Although this game is good at the same time it is terrible, really, really terrible. Well, let me explain a little better…

The world of Final Fantasy XV is amazing, very well made and with a nice base-plot behind, when you arrive in Altissia and see all that waterfall and how it works is amazing, there is a mix between a modern world with a beautiful touch of fantasy, with magic, gods and everything else are very well-built.

So what is terrible in it?

First of all, let’s begin with the side quests. The base plot story of the main character Noctis is “ok”, in truly, it is pretty good, however, the way that the player has to follow this story inside the game mechanics is terrible.

The game looks like an unfinished game full of plot holes, useless chapters and quests that are worst than Naruto anime’s fillers. Instead of fill this terrible HOLES with some useful quests… But no, it doesn’t happen. Some entire chapter’s plot are just so terrible as the side quests.

I was sent to look for Mythril to fix my ship. The Mythril is located in a specific mine. So I went there in this mine following a nice dungeon and in the end of this, I found a blue dot flashing in the mid of the ground. So I picked it like a random potion, ok… So I went back to the dungeon’s entrance so I could head back and finish the quest. After finishing the quest and get ready to get out of that continent in “my” fixed boat I was (with no reason) “teleported” inside a “Power Plant” and forced to kill some demons there and head back without any plausible reason.

Many parts of the main quest make it look like there should have a “better background” behind. Some parts in the game the development team didn’t have enough time to develop it properly and cut off so many things to sell in future DLCs (or not). It is like was replaced for a “simple and prolonged content” to build time to the players. The game could easily take less than 2 hours of gameplay plus cutscenes to finish it if there were no “fillers” in the main storyline. 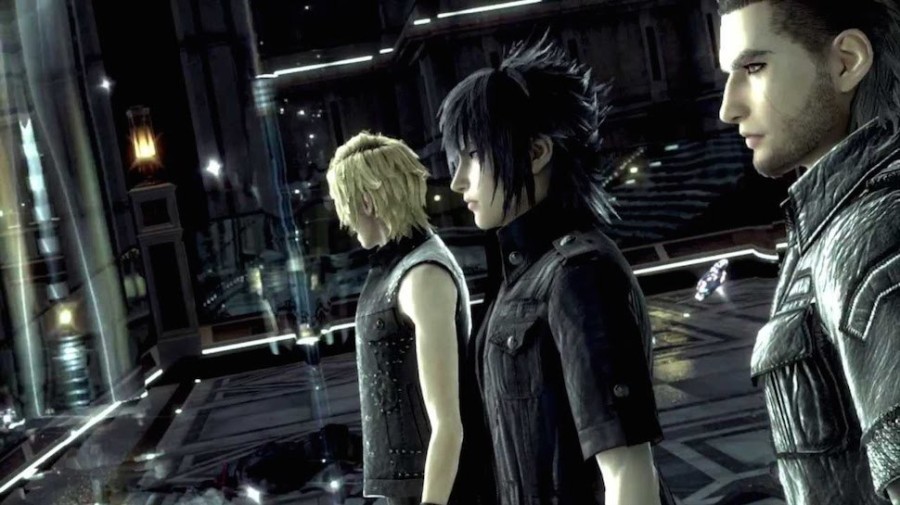 Everyone already knows about this problem but in the second part of the game (more specifically in chapter 9) the game changes a bit. From chapter 9 forward the game becomes more linear with some QTE to complete the adventure of Noctis. However, it worked well, but not perfect. I think there should have a new exploitable continent to the player, one of the characters in the game speak a specific thing before the chapter 9 that makes clear that the exploration will continue in a “new continent”, what was probably cut off because of the lack of time in the development or because “we need more content for DLC”. I don’t know and I don’t care.

So this is the only problem of the game?

No! That is just the begin.

The side quests are awful…

One woman ask you to look for five yellow frogs in the lake and bring it to her. The other guy wants you to bring a piece of “meat” of Catoplebas, so he can make a delicious food for you. All side quests have some terrible context, worse than any MMORPGs and we are talking about a single player game. It basically works in: “Take the quest”, “go to the place X”, (“kill the monster(s)” or “pick something”) and “bring it back” with some shit excuse.

That is why it is called side-quest, right?

No! Side-quests are supposed to bring some small complementary plot of the world or main quest itself. Explore this amazing world’s stories and possibilities and bring more useful knowledge about this to the player! That doesn’t happen!

Another problem is… The game is too easy. I have no idea how is the Game Over Screen. My character Noctis has never died. When you beat the game some good quests appears, some of these quests are a good challenge to the player that will make you often access your inventory and keep healing, healing, healing more and maybe a phoenix down or two over the fallen party members, but nothing really hard enough to make you lose.

Talking a little more about the combat… The combat is really fun and works very well in real time, but have tons of problems one of them is the Summon system is terrible, the summons appears in some rare random time while you are fighting, it could work better, another problem are cast the magics, while you are in combat it is cool but, could be better, the magic could be associated with MP, but no, it is an equipment in your inventory with limited amount of magic to cast. The biggest problem is the Combat Zone, a circular area, if you leave this area the combat ends, the enemies start to recover HP and stop attacking you (what makes the game easier and avoid you from to die).

Just a note, but the entire game made me remember the game “.hack//G.U”, since the way you pick quests, side quests, the combat mechanic and even the game difficult. Both games have some great similarities.

RatE: 8.0/10.0 –  Final Fantasy XV is really a fun game. Even after 80 hours I have been yet excited with the game. What I see is a fun game that could be one of the best JRPGs ever. But the final result is too far from that, the game looks incomplete in every aspect, there have some potential characters like the final boss, that could be one of the most amazing villains of all time, but it doesn’t happen, because they don’t explore this great villain in side quests or even in the main quests. It makes that he looks just like a dull, idiot and weak villain. The entire World of FFXV is really amazing, but “empty” at the same time. All of this “emptiness” in the world and each character’s background probably will be filled with DLCs and transmedia materials, since the game is incomplete for now. Despite this problems, the game is easily one of the most fun single player games of the year.